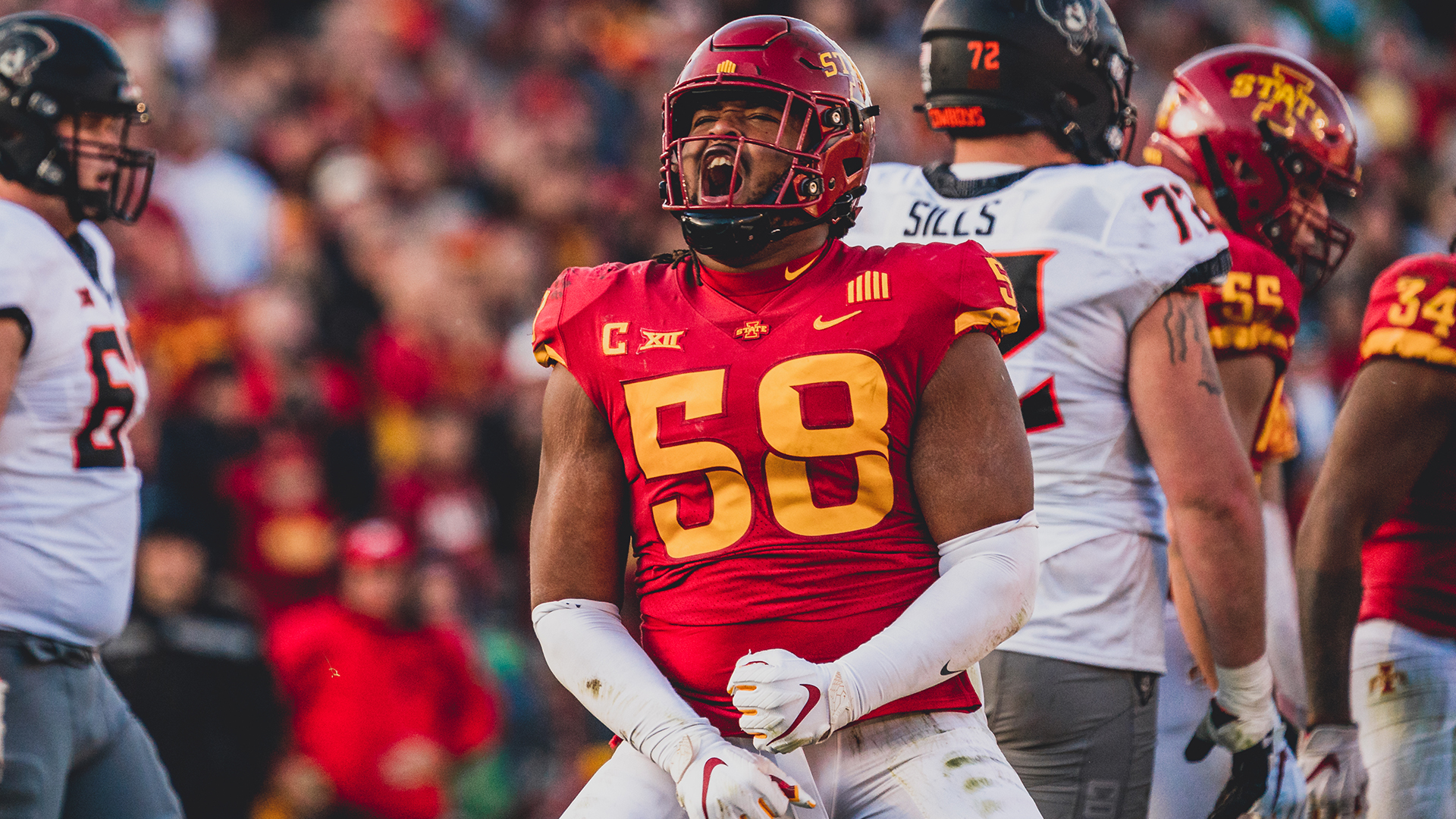 Eyioma Uwazurike is a gargantuan defensive linemen out of Iowa State and the Denver Broncos fourth-round pick. He was a redshirt senior at Iowa State who earned an extra year of eligibility due to COVID. Basically, Uwazurike has been developing at Iowa State since 2016 and is one of the more experienced players in general from the 2022 class.

He was an under the radar guy for the Cyclones until exploding statistically last season. Uwazurike started all 13 games and generated 9.0 sacks, 12.0 TFL, and 43 tackles ,all career highs, on his way to earning First-team All-Big 12 honors.

After the impressive year, he received an invite to the East-West Shrine Bowl, where he dominated opposing linemen throughout the week in individual drills.

He chose not to run at the combine, instead only participating in field drills where he showed off his explosive short-area moves and fluid change of direction ability.. He also was officially measured, where he came in at 6’6 316 lbs with over 35” arms.

At his pro-day, he tested how you’d expect for a man his size with below average speed and agility times for his position, and in the 2022 NFL Draft he fell out of day 2 to pick 116 to the Denver Broncos.

Did Denver find a steal with this day-3 pick? I took to the film to find out.

You can’t teach length, and Eyioma has it by the boatloads. His 35” arms combined with his hand speed allows him to catch offensive linemen off guard before they have a chance to react, and also allow him to get hands on ball carriers and QB’s who appear just out of reach. He absorbs opposing ball carriers, rarely missing tackles, and uses his physicality through the whistle.

He wears down pass protection with his consistent effort and often draws holds on linemen who are simply trying to grab onto this mammoth for dear life. Understands dynamics of the pocket, generating a ton of second effort sacks on Quarterbacks attempting to escape the pocket up the middle.

Eyioma Can be asked to line up all over the defensive line. Iowa State lined him up from 1-tech over the centers to the 5-tech lining up over the tackles, and he saw more success rushing from the outside than you’d expect from a guy his size. Effective in stunts whether being used as a primary block-eater or asked to loop around. And even showed the ability to be dropped as a spy, running down the more mobile QB’s Iowa State faced.

Can rely on his long arms early on to get himself on the field in sub packages, as he offers impressive upside as a pass-rusher. His best game of the season was against Texas. Uwazurike showed off NFL ability as a dominant force along the defensive line, generating pressures from multiple spots.

Offers quality depth behind DJ Jones, and Dre’mont Jones; could even be the eventual replacement for Mike Purcell.

The size of Eyioma is something to behold, but watching the film he doesn’t play up to the hype you’d expect out of such a goliath. This stems from constant high-pads, allowing him to be easily knocked off balance by lower centers of gravity. He generates most of his power through his arms and upper body but lacks the lower body strength to generate a consistent bullrush, often allowing linemen to recover after his initial punch.

In the run–game he isn’t the immovable object I had hoped to see. He’s easily moved around and gives up a ton of ground. He doesn’t fight through double teams well, often losing balance or being turned around and allowing for blockers to reach the second level. This was evident in the Iowa game, where Linderbaum consistently opened massive running lanes against Uwazurike.

The slightest chip from a running back or tight end leaves Uwazurike nullified and when he finds himself in one on ones with a much smaller blocker in the backfield, he struggles to win the matchup.

I don’t know exactly where he fits in the NFL. He’s a “jack of all trades but a master of none”, if you will. The size to play inside at the nose is great, but his struggles against the run would have me hesitant to pencil him in behind Purcell. He could look to rotate at the 3-tech and inside on sub-rush formations with the Jones duo, but he lacks the athleticism and doesn’t possess a deep arsenal of rushing moves.

It’d be a lot easier to get behind the possible “ceiling” of Eyioma, but he’s already 24 and didn’t flash much on film until 2021. In a crowded and talented defensive line room , I’m not entirely sure where Uwazurike fills in for Denver in 2022.

Eyioma Uwazurike is a versatile depth piece that will be utilized all over Denver’s trenches, both clogging rushing lanes and pressuring opposing quarterbacks. A player who developed over the last 5 years at Iowa State bringing tons of experience and talent to an already deep defensive front.

I’ll say it one last time, the calling-card for this guy is the size. There are very few defensive linemen that match his measurements, and if he can learn to perfectly utilize his frame and arm-length he’ll be a menace for offensive linemen to face off against.

Outside of DJ and Dre’mont Jones, the interior defensive line rotation is completely up for grabs. Which leaves a ton of opportunity for Eyioma Uwazurike to make an impact in Denver year one.

If he can improve his play against the run and fix some pad-level issues, while maintaining his dominance as an interior rusher. Eyioma could be a key cog in the defensive-front for many years to come.