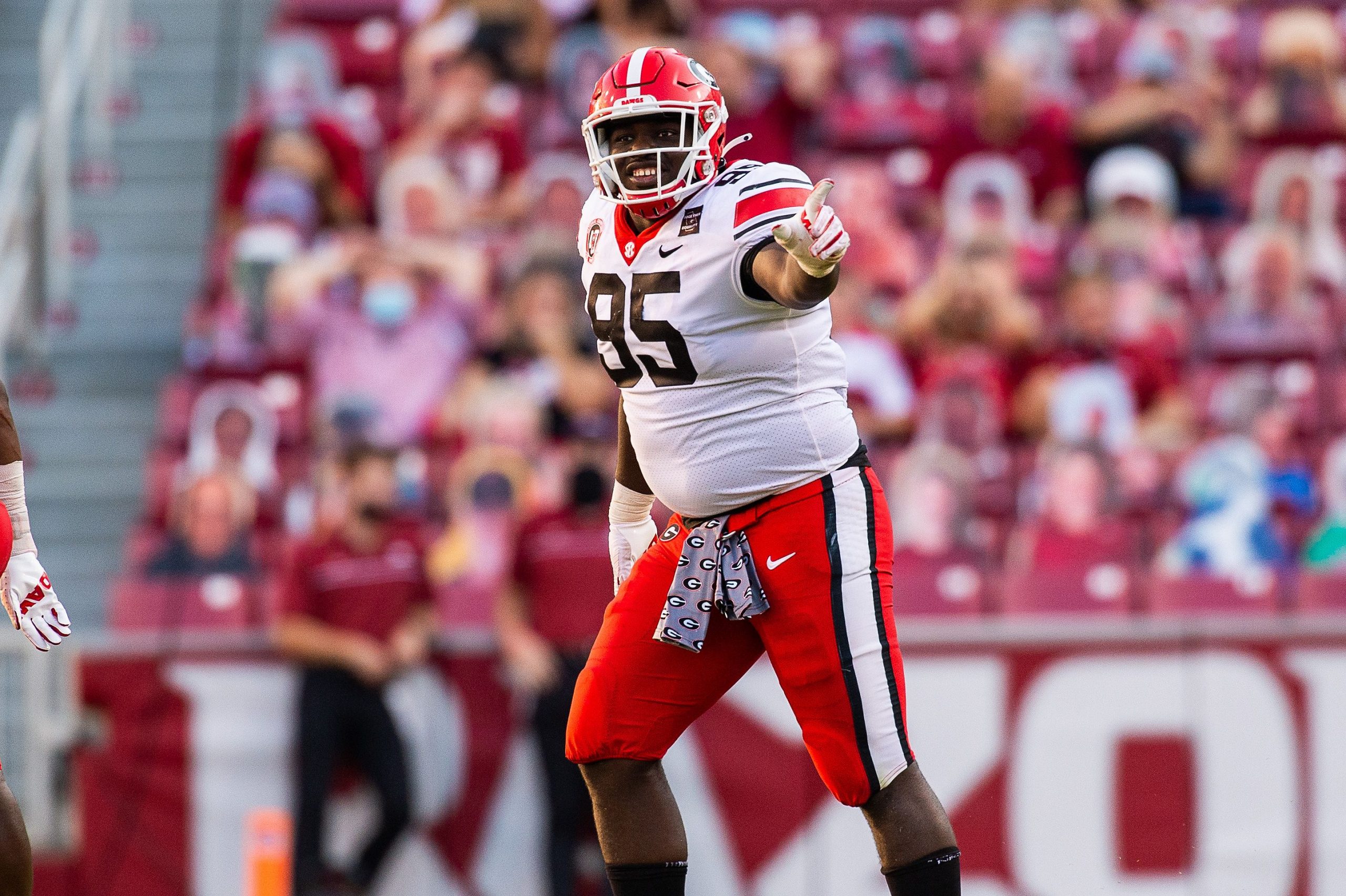 One of the country’s best defensive units at all levels of play this season was the Georgia Bulldogs front seven. With a defense which featured some of the pound for pound most athletic humans on the planet, they made SEC offensive lines look like Junior Varsity squads on their way to a National Championship.

Most draft fans are familiar with the faces of their defense and assumed top-15 talents; Jordan Davis, Travon Walker, and Nakobe Dean. But the prospect I find the most impressive and whose game I believe will translate best at the next level is defensive tackle Devonte Wyatt. While Wyatt can be somewhat overshadowed by Jordan Davis (literally), Wyatt possesses the ability to be a true 3-down defensive linemen with the most pass rush upside of any interior defensive player in this class.

Wyatt was a four star recruit coming out of high school, before arriving at Georgia where he played 49 games over the course of four seasons.

In the pre-draft process he has been one of the biggest stars, putting on dominant displays at the Senior Bowl practices before an ankle injury forced him to miss the actual game. He followed up that showing with an all-time combine warrior performance, flashing a 4.77 40 yard dash and a 7.45 in the 3-cone. In other words, Devonte Wyatt is running better times than some tight ends, and he’s doing so while weighing a touch over 300 lbs.

While he isn’t quite the behemoth that is Jordan Davis, or the insane athletic specimen that is Travon Walker, Wyatt’s combination of size, explosiveness, scheme/positional diversity, and savvy as a pass-rusher will find him on the field early; once he enters the lineup it’ll be near impossible to take him out.

Devonte lined up all over the Georgia front but found most of his success abusing guards from the 3-tech. He possesses adequate strength to play some nose, and even found success lining up over tackles on occasion, but his rare first step explosiveness when stepping into gaps makes him a nightmare to block in the run game.

There are plays where his sideline to sideline movement is “linebacker-esque” as he magically maneuvers traffic and gets skinny between blockers, as if he isn’t one of the largest players on the field. He shows great effort when fighting through doubles and has both the speed to run plays down from behind, and the lateral mobility to keep plays in front of him.

His true dominance comes in the pass game, where his combination of interior rush moves matched with his overall twitch and hand-fighting makes him my favorite Bulldog in this year’s class. He shows a great understanding of how to use his first step to get opposing linemen off balance, and uses that to swipe, chop, spin etc. players into oblivion. His bend as a rusher simply doesn’t make sense… multiple times on tape this gargantuan human is somehow running on his ankle like he’s Robert Quinn, and can even catch the occasional tackle off-guard with his dip around the outside shoulder.

He’s very effective on stunts, an absolute mismatch left one on one, and even possesses an effective strip-sack.

While it seems a tad unjust to lay this on Wyatt with the others seemingly passing through the process unscathed, Wyatt played amongst one of the greatest college defensive fronts the game has ever known. They are all incredible players in their own rights and showed it week after week on film, but being surrounded by so much talent does have its benefits when it comes to the amount of attention that can be paid to each player. Travon Walker and Jordan Davis definitely helped Wyatt receive more single team blocking than he should, but that argument works both ways.

While Wyatt possesses fine field strength, overall he doesn’t pack the biggest punch in the run game or his attempts at bull rushes. While he has the versatility to play over center, I think it’s definitely in his best interest to put him next to another stout nose tackle in three man fronts, and let him maximize his talents rushing in sub packages from the interior.

When week one kicks off Devonte Wyatt will already be 24 and a half years old, which is old by rookie standards and he’s likely closer to a finished product than the other prospects in the class. If a team were to take him in the back of round one, he’d be 29 when he’d look to sign his first deal, including his fifth year option. Rebuilding teams a few years away may want to draft on the younger side, while established playoff teams may favor the more experienced prospect who requires less coaching to be game ready.

I believe Devonte Wyatt is a first round talent. Very few interior defenders come in so polished in both their run defense and pass rushing, and even fewer possess the freak athletic capabilities of Wyatt. He’s set apart from his teammates at Georgia with his ability to be a 3-down linemen year one, and the mastery of his rush moves.

Every game I watched I found myself more enamored with his quickness and hand-fighting, and contending teams should be chomping at the bit for the chance to acquire this difference maker in the middle. Wherever he goes, the guards in his division will be losing hours of sleep trying to calculate how to block this guy come fall.