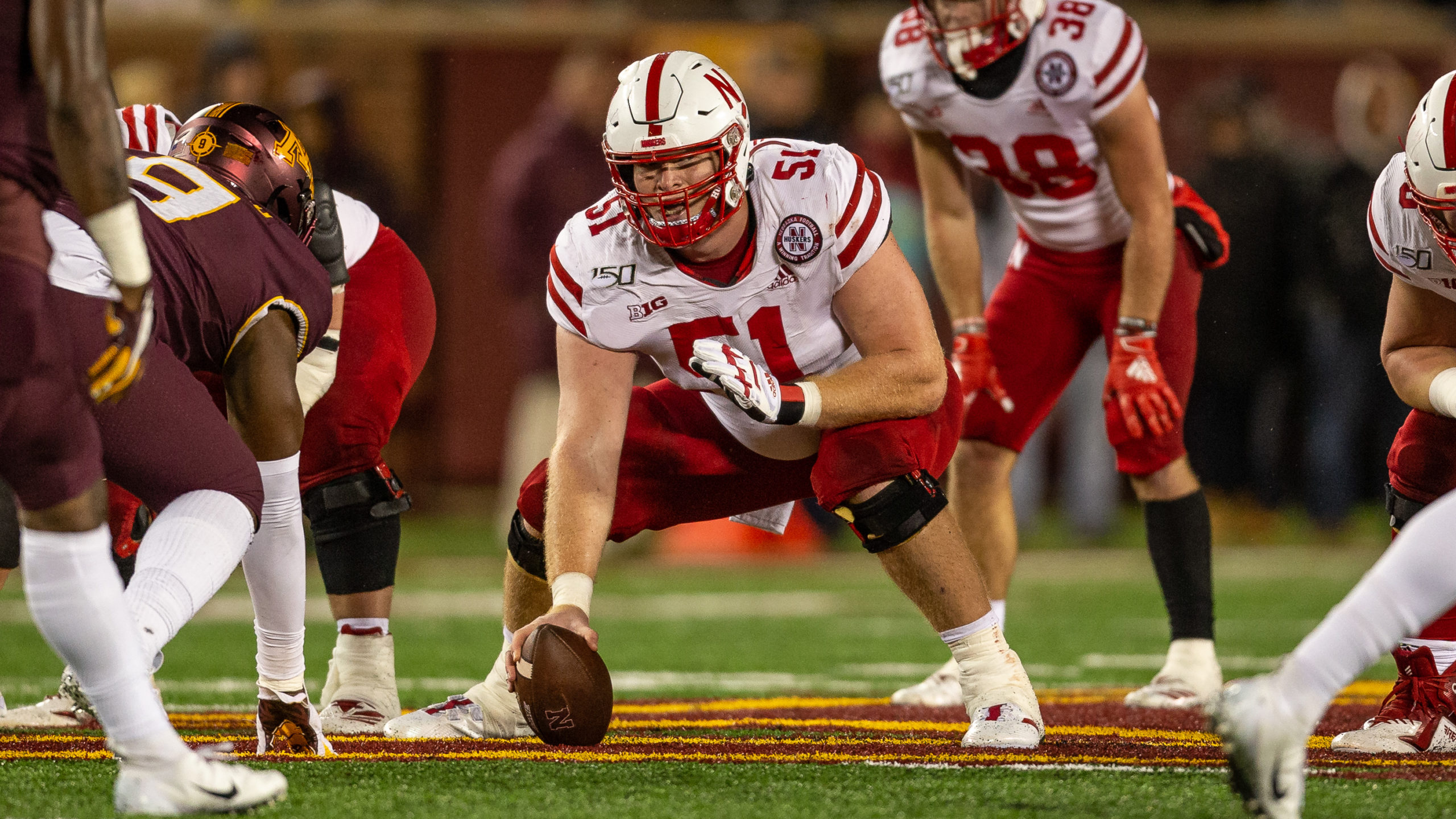 Cam Jurgens is an athletic marvel, hailing from the cornhusking nation of Nebraska. A starter for over thirty games, Jurgens came into college as a tight end but spent his redshirt season bulking up for the transition to center. Once he entered the starting lineup as a sophomore, he was a force on second-level defenders; he had maintained his speed and athleticism from his days as a pass catcher, while adding some pop behind his hands with the increase in size.

Jurgens was a three sport athlete in highschool (football, basketball, track) and was a true ironman in football, playing tight end and linebacker. He excelled on both sides of the ball and was selected first-team all-state at both spots. He even served as his high school’s primary punter, averaging 35.8 yards per attempt.

Jurgens became a pre-draft process darling after blowing up the combine and Nebraska’s Pro day with an absurd RAS score of 9.94. This impressive testing included a 4.92 in the 40 yard dash, a 33.5” vertical , and one of the best 3-cones ever recorded by a center at 7.19.

Needless to say, once I saw these numbers I knew I needed to take a closer look at the mutant playing center in Nebraska. Did his tape live up to the freakish testing numbers?

Jurgens flies around on the field, his movement ability is no joke. Whether it’s hauling 40 yards downfield and laying blocks on screens, climbing to linebackers and safeties off the snap, or pull-blocking edge rushers in pass pro his 4.9 speed shows up all over film allowing him to get his hands on players that most centers simply can’t. His understanding of leverage combined with this speed allows him to seal off running lanes before defenders even have the chance to react. He can somehow get his head around 4-techs and prevent them from disrupting plays upfield. He shows patience in pass protection against stunts and finds work on double-teams when he needs to. Jurgens is a dream selection for teams wanting to run more zone blocking schemes, and profiles as one of the highest potential players in this class. Cam, at age 22, has only played center for the last three years , making him the perfect moldable building block for any of the Shanahan-tree offenses in the league. Few centers can do the things he is asked on a game-by-game basis.

Jurgens is still a tad undersized for the position. Listed at 290 pounds, he struggled against some of the bigger bodies he faced along the D-line in the BIG-10. His grip strength leaves a fair bit to be desired, and while he can move very fast, he sometimes is choppier in his movements than one would like. He isn’t ready to start right away and is reliant on falling into the correct system. While his ceiling is high, his floor is equally as low. Although we’ve already seen an incredible transformation from Jurgens, from a tight end/linebacker hybrid to one of the more impressive centers in the BIG-10, he still has a ways to go to become an NFL caliber center. While his ability to fly off the line and climb to linebackers is his greatest strength, he struggles with finishing his primary blocks before moving onto the smaller target. He needs to learn to pace his quickness with the rest of the line, to not over step his gaps and allow defenders to shoot through. In pass-protection he has a tendency to let off blocks too early, struggling to keep his grip around stronger interior players. He’s too reliant on building a head of steam on his blocks, and lacks a true anchor to obstruct oncoming threats. He has below average arm length and struggles against defenders who know how to utilize length of their own.

Cam Jurgens should find himself selected early on day two. His athletic profile is one of the best we’ve seen at the position and while there is  some development needed before he can start; with time, the right system, and the right coaching, he has all the tools to become one of the top centers in the league. That, combined with this draft’s lack of top-end talent could see him selected as high as the top-50, but I believe it would be a mistake to force him into a starting role day one. While his ability to get upfield and lay blocks on linebackers and DBs is enticing, I believe he will struggle early on against the strength of the NFL defensive trenches.