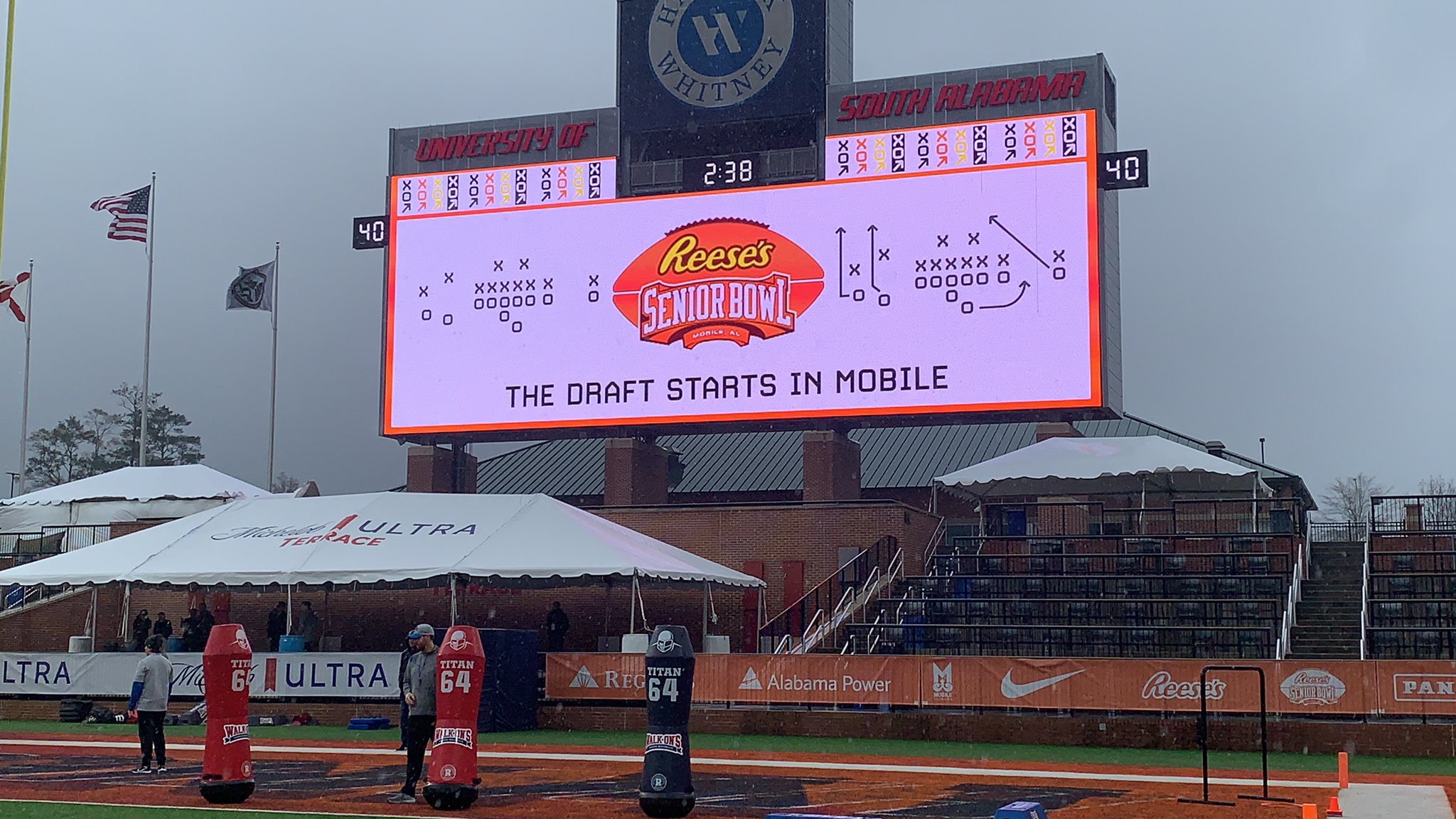 Senior Bowl Week has come and gone, and with it many of the players who made the trek down to Mobile have bolstered their draft stock. Thanks to Jim Nagy and his team, who did an excellent job providing film for media members who weren’t able to make the trip, I’m excited to share some of the guys who I fell in love with over the week.
In the weeks leading up to the event I took a look at 5 players who would be showcasing their talents. After going over the tape, it’s time to take a look at how the performances of Kenny Pickett, Daniel Faalele, Jalen Tolbert, Mario Goodrich, and Arnold Ebiketie affected their stock in this year’s NFL Draft.

Kenny Pickett’s play on the tape underwhelmed for what you’d hope from the possible QB1 in this year’s draft. While he showed the quick processing and ability to throw with anticipation that litters the tape from his time at Pitt he failed to answer many of the major questions which had been presented before his arrival. He skipped out on hand measurements due to a double-jointed thumb, he struggled with velocity and accuracy on day 2 in the wind and rain, and he showed a lack of ball security with multiple fumbled snaps. I don’t want to make it sound like Pickett had a bad week, because that certainly isn’t the case, as he was voted the top QB on the National Team and reportedly shined in interviews with teams, showing sharpness above the shoulders. We already knew Pickett was smart, and based on the roster, it shouldn’t be a surprise he was the best of his bunch. The problem lies in his inability to truly shine amongst the competition for a QB projected to be drafted as the savior of a franchise.

Jalen Tolbert measured in slightly under his projected height of 6’3 at 6’1 on Monday. What followed were three days of utter domination at the receiver position. Tolbert combines a variety of deadly release packages with smooth route running and impressive deep speed to boot. An easy separator who will make an immediate impact for whichever team calls his name on draft day. Jalen probably played himself into a top fifty selection, and would’ve been the favorite wide receiver in Mobile if it weren’t for the physical specimen that is Christian Watson.

Faalele entered the week a mountain and he left a mountain. Officially measuring in at 6’8 387 lbs, he quickly caught my eyes on tape moving well and bullying opposing defenders in the run game. There’s no questioning his anchor, but Faalele did struggle against the impressive fleet of speed rushers he faced on the National team in 1-on-1s early on and had a tendency to overset his base. He improved everyday as the week progressed and looks to continue shooting up draft boards as the predraft process continues. Look for the Golden Gopher to hear his name called early on day two.

Goodrich showed off his physicality and length at the line all week long, frustrating every receiver he faced. A smooth mover with impressive press technique, Goodrich glues himself to the hips of opposing wideouts and utilizes his frame and ball skills to interfere with catches. He also displayed top-end long speed, clocking in as one of the 5 fastest players in Mobile at 21.22 MPH by Zebra Technology. If he can clean up some of his grabs and put together an impressive showing at the combine, Goodrich should easily be a top 100 selection.

The deepest position group in this draft, and by far the best position group at the Senior Bowl, are the EDGE Rushers. Through the first couple practices seemingly every rep was won by one of the seemingly infinite freak athletes going after the passer. One of those aliens flying around the EDGE was Penn State rusher Arnold Ebiketie. Arnold dominated tackles with his explosive first step and crazy wingspan, and showed creative versatility in his rush moves. Seemingly destined to put up a freakish combine, Arnold could work his way into the back end of the 1st round.

Draft season is in full swing, be sure to tune back in for more recaps of my favorite players from the Senior Bowl! Follow me on twitter @FrankiesFilm and visit us right back here on FrankiesFilm.com for all the best discussions on NFL and Broncos football!